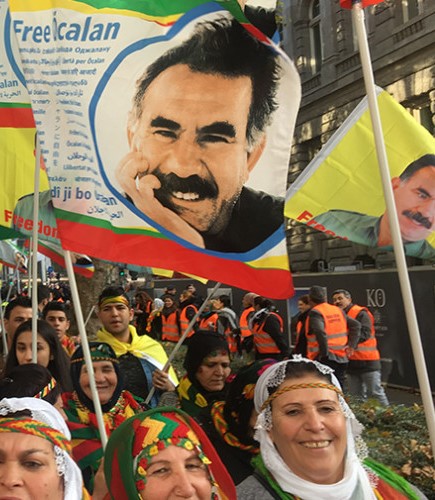 By the Internationalist Commune

There are some days when we no longer see the sky with so many enemies around us. The apocalypse seems more likely than the end of capitalism and we are surrounded by patriarchal attacks – inside and outside of us. Sometimes I can no longer believe that we can make revolution – revolution what does that even mean? A different life? All this seems so far away, so abstract- really like a distant utopia. And in all this leftist depression, Rojava is like a huge beacon of hope. Rojava, that is a revolution in the 21st century. This is a revolution that combines so many struggles, so many ideas – a society that organizes itself, a society without state, a society based on gender liberation and ecology. An anti-fascist revolution against colonialism, against imperialism. Rojava is the proof that another life is possible – Rojava is a living utopia, a vision of how the world after capitalism could look like and how we can get there. Rojava is a perspective during a time full of attacks.

If you talk about Rojava, then you also have to talk about Abdullah Öcalan. Often, at demonstrations you see the admiration in the faces when it’s about Rojava, and you hear common slogans shouted like Jin Jiyan Azadi [Life, Woman, Freedom]; but then pictures of Öcalan are waved, or a speech for his freedom is held, you can see the doubts coming up in the faces. You hear them say: Rojava is great, but Öcalan? Better not.

There is this huge distance – and I ask myself why? And I think – it’s dangerous!

Revolution does not happen in a day and Öcalan’s philosophy and the revolution in Rojava is the result of a decades-long process of struggle and organizing, The roots of the revolution in Rojava go way back, to at least the 1970s – the second revolutionary cycle of the 20th century, with all the feminist, anti-colonial and anti-fascist struggles. It is during this period that Öcalan’s philosophical and political struggle begins. In 1978, Öcalan founded the Kurdistan Workers’ Party, the PKK – in response to the brutal oppression and cultural genocide of the Kurds – the goal at that time was an independent state. The PKK began as a Marxist-Leninist national liberation movement, as it was the case in many other places, too. There have been many revolutionary movements in the 20th century, many have made revolution, many have become ruling parties of new nation-states, and even more have been defeated, especially in the 1990s. However, the PKK has taken a different path, it has not been crushed, but has prepared the way for revolutions in the 21st century, for the revolution in Rojava. It is worth taking a look at the 90s to understand this in a better way.

The 90s were bascially the time of a big counterrevolution – the end of the USSR, the so-called ‘end of history’, the intensification of the neoliberal turn and the rise of fascism all over the world. Almost all freedom movements fell into a deep crisis during this period – the world changed rapidly, but a common left analysis and perspective disappeared. Faith in revolution got lost and many revolutionary movements gave up their struggle, coming to terms with the state or shrinking into small controllable subcultures. The crisis of the 1990s was above all a philosophical crisis – leftist ideas and analyses of the 20th century reached their limits and many movements failed also because of their own mistakes.

In this great intellectual crisis of the left, Öcalan intensifies his efforts to develop a new revolutionary theory and practice. He analyzes history – the history of resistance movements, the anarchist, feminist and anti-colonial resistances, and the history of domination back to its first roots – the founding of patriarchy 5000 years ago. He rethinks the analyses of Marxism and develops a new understanding of history, of revolution, of society, of domination – looking for answers to why the revolutionary movements of the last centuries failed and what to learn from them. And he asks what our goal – a free life – could actually mean.

Öcalan develops democratic confederalism as a new revolutionary concept and the PKK uses the time of the crisis of the 1990s and makes revolution, a philosophical revolution – a revolution within itself. It changes its paradigm and gives up the aspiration of having one’s own state – because states are part of the problem and a free life can never be achieved in a state. On this basis, gender liberation also becomes the heart of the struggle – because patriarchy is the first of all forms of domination and without the liberation of women, society can never become free. And as today in Rojava the women’s movement is the heart and the driving force of the revolution, it is also the same in the PKK – from its own women’s guerrilla, YJA Star, to the twin party of the PKK, namely the autonomous women’s party PAJK. The question of relationships also becomes central to the struggle – relations we have within ourselves and with each other – because domination works by establishing certain types of relationships. If we can’t eliminate patriarchy in our relationships, we cannot build a free life! Hev Jiyan Azad and Hevalti is the search for being oneself [Xwebûn], the search for free relationships that are no longer dominated by 5000 years of oppression.

Öcalan and the PKK have made revolution. A revolution that gives hope to millions of people and that is dangerous. If the ideas of democratic confederalism continues to spread, if people start to really believe in revolution, in a different life again, if there is a concrete real alternative to capitalism, then we have a chance to really change the circumstances, in order to accomplish a revolution. A real revolution, which is not happening in some distant future, but which can be our present.

Nothing is more dangerous than the belief in change! The ruling nation states are all too aware of this and they have done a lot since then to stop Öcalan and the PKK. Öcalan was kidnapped from the Greek embassy in Kenya in 1999 by a secret service operation of several states and has since then – for 22 years – been in solitary confinement on the prison island of Imrali. For years without any contact with the outside world. Öcalan is, besides everything else, a political prisoner who has been tortured for 22 years. The states are afraid of Öcalan – and how great their fear is, can be seen in the grotesque measures of repression against him and the Kurdish liberation movement. One example – the ban on images. In Germany, there are only two persons whose pictures are publicly forbidden. Öcalan and Hitler.

To demand Öcalan’s freedom means to hold onto free life.

That Öcalan is so unknown in the left movement in europe today has many reasons, one of them is certainly orientalism and racism. If a European philosopher or activist had achieved even half as much or inspired only half as many people as Öcalan has done, he would probably be hyped like half a half-god. But the left’s distance from Öcalan is also due to a very successful policy of isolation and repression. We have to break through this isolation. There are a hundred reasons to stand up for Öcalan’s freedom. Be it that he is a political prisoner. Be it that he is an anti-colonial freedom fighter. Be it that his philosophy and struggle has started a new revolution. Öcalan’s philosophy shows new ways for a revolution in the 21st century – and we dare to say that Rojava is only the beginning. The idea of democratic confederalism will influence and bring about many revolutions around the world in the decades to come.

Rojava is a beacon of hope. And so is Öcalan. For Kurds, but also for all the rest of us who insist on a different life, a free life. Defending Rojava doesn’t just mean defending a piece of land, it means defending the philosophy behind it and taking it out into the whole world, making it the nightmare of capitalism. Defending Rojava means making revolution all over the world and seeking the free life. And defending Rojava also means fighting for Öcalan’s freedom – for an end to his isolation.

Dem Dema Azadi Ye – It is time for freedom