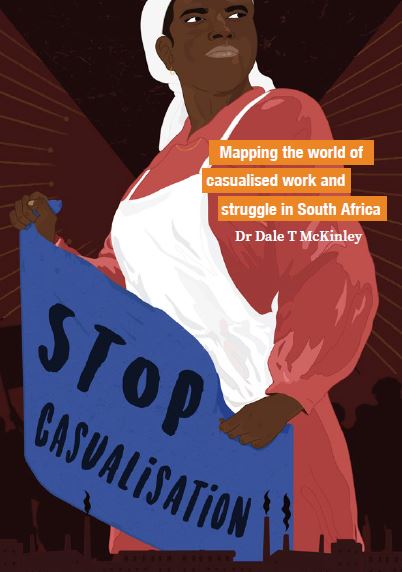 Mapping the World of Casualised Work and Struggle in South Africa

The core contextual backdrop that frames this project is the radical and ongoing recomposition of the broad working class, both globally and within South Africa. A central part of that recomposition has, over the last 20-30 years in particular, consisted of a major shift from a mainly permanent and largely industrial working class base to one where a majority of workers in the private sector, and a growing portion of those in the public sector, are now casualised and where large-scale/heavy industry no longer dominates the working landscape.

These structural changes, which apply in both South Africa as well as across the globe, are best captured as constituting a ‘flexible labour market’. What has happened is that the labour market has been “polarized into various layers which simultaneously increase insecurity and broaden the scope for cheap labour … [wherein] differentiation is producing zones of exploitation, incorporation and marginalization in the South Africa labour market”. The main components of this flexible labour market are: employment insecurity; wage flexibility; numerical and working time flexibility; health & safety concerns/problems; gender discrimination/inequality; labour market and economic insecurity; problems related to the comprehensiveness and enforceability of labour laws; and, low or lack of, social protection.

By way of conceptual definition the term ‘casualised’ (in itself contested and which will be explored further in this booklet) encompasses at least four distinct ‘types’ or categories of casual workers. While these categorisations are certainly not fixed, and noting that in some cases there can be overlaps amongst them, it is useful to break them down as follows: a) fixed-term/part-time/seasonal contract workers which are a mix of primary and outsourced workers; b) labour broker workers (which includes sub-contracted workers); c) day labourers, whose work is largely unregulated; and, d) popular economy (informal sector) workers, whether as an employee or self-employed.

Another crucial part of the changes that now define the majority of the working world, particularly in South Africa, has been the gradual but systematic co-option, weakening and in many cases demise of, dominant industry/sector specific trade unions. Not only have the ranks of casualised workers been swelled with ex-union members, there are now a large majority of workers who have no political, organisational or workplace connection to such trade unions. In turn, this has fundamentally shifted the life, work, struggle and organising/mobilising realities and experiences of these workers. Yet, this has not been paralleled by a complementary shift in the core content and character of labour/worker research and analysis or, in the approach to organising, mobilisation and education. The reality is that on both of these fronts, the focus largely remains (again especially in South Africa) centred on unionised, permanent, mostly factory-based and larger-scale manufacturing and extractive sector workers.

As such there is scant research and analysis, and more particularly from left/progressive researchers-writers and activists in South Africa, on what the contemporary ‘world of casualised work’ looks like in hard facts and numbers. This is paralleled and indeed catalysed by the general paucity of empirical information/statistics related to casualised work/workers; a situation that stems from both Stats SA’s limited and frankly crude methodological approach to measuring the full range of what constitutes casualised work, alongside the sheer rapidity of change in the number and types of casualised work which makes it extremely difficult for the data to keep up with the reality.

Further, there is certainly the need for more work and thought to be given over to what the ‘map’ of structural and empirical realities means – in strategic and tactical terms – for worker specific organisation, mobilisation and education as well as broader left/progressive linkages, support and solidarity (amongst casualised workers as well as between casualised and permanent workers). As the Casual Workers Advice Office (CWAO), one of the few outfits that has tried to engage these questions and challenges, crucially points out, it is important to have a fuller picture of numbers and different types of casual worker precisely because there are different possibilities (the who and how) of organising.

This research will hopefully act as a foundational basis upon which more extensive and in-depth research and analysis in respect of the world of casualised labour can be conducted. In addition, to provide workers, their organisations and associated ‘civil society’ allies with useful information which can contribute to more informed and effective engagement, organising, mobilising, education and overall struggle.

The basic format of the report consists of: an initial section (which forms the core of the report) that provides an empirically-grounded macro-‘mapping’ of the world of casualised work; a second section that surfaces the core issues and challenges experienced by/facing casualised workers; and, a final section that offers some perspectives on the key strategic questions going forward.