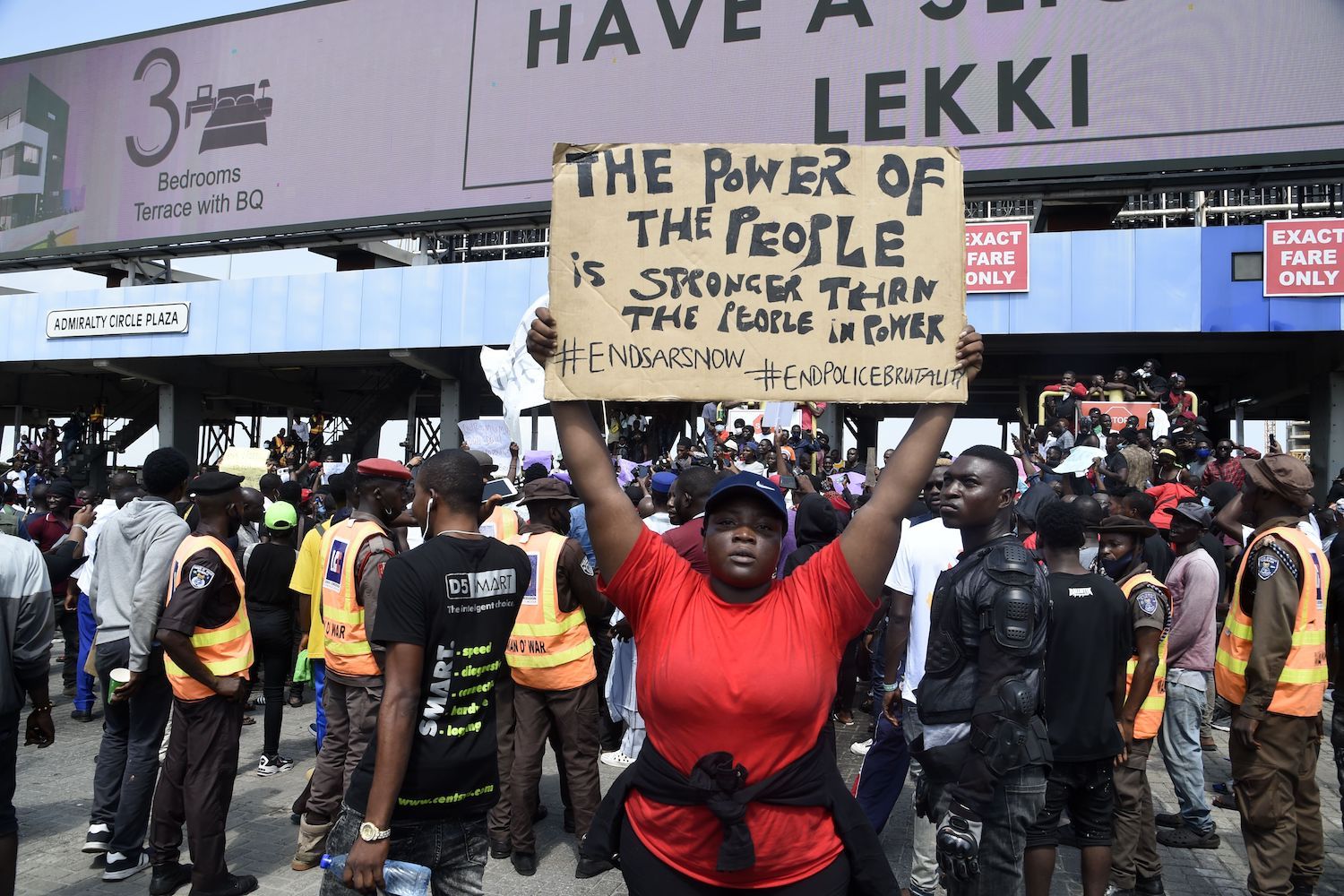 Nigeria and the Hope of the #EndSARS Protests

A video went viral on social media platforms on October 3, outlining how the notorious Special Anti-Robbery Squad (SARS) unit of the Nigerian police force shot a young man, dumped him at the side of the road and stole his car. What followed was three weeks of protests by young people against such police brutality and the corruption that defines the state; initially via social media, #EndSARS, and later in towns and cities across Nigeria.

During these protests the Nigerian state used various tactics to either suppress the protests or to try and demobilise them through insincere “concessions”. To begin with, the ruling class, the state it controls and its head, President Muhammadu Buhari, attempted to quell the protests through window dressing. Inspector General of Police Mohammed Adamu promised on October 11 that the SARS unit would be disbanded and supposedly replaced with a new unit called SWAT (Special Weapons and Tactics). This was an obvious lie, as the same personnel that formed part of SARS would form part of SWAT. Over the last several years the government has made similar announcements resulting in no actual change.

Needless to say, the protests continued and grew into the largest in the history of Nigeria. As the protests grew, the state changed tactics and responded to the escalation with outright violence. Part of this involved the state deploying thugs to attack protestors in order to try and intimidate people off the streets. When this failed to produce the state’s desired result, it deployed the military and implemented a curfew in a number of cities. By October 20, however, the protests had spread across Nigeria. Some of the assets of the Nigerian ruling class were also targeted during these protests and the largest and most lucrative toll road in country, Lekki, in Lagos, was blockaded. On that day the military attempted to brutally end the protests and shot dead 12 people at the Lekki tollgate.

The Nigerian state has a long history of violence

The violence of the Nigerian state that has become evident over the last month is far from something new. For most of its existence, the Nigerian state has been under a dictatorship. While Buhari was elected through a very narrow form of representative democracy, he was also the head of a military dictatorship in the 1980s. In fact, the Nigerian state has a notorious history of using brutal oppression to hold the working class in check. One needs only think of how the state unleashed the military onto people in the Niger Delta in the 1990s who were opposing oil companies, such as Shell, due to the devastation they caused. During that period, thousands of people were killed or disappeared.

The SARS unit is, therefore, not an exception, but the norm in terms of the violence of state structures in Nigeria. Members of the SARS unit even routinely rob people: between 2017 and 2020 there were 82 cases reported of members involved in ill-treatment, torture and extortion. To understand why the structures of the Nigerian state are so brutal, one has to understand how capitalism, imperialism and class rule have functioned in a post-independence Nigeria. Indeed, although the immediate cause for protests by youth (who are targeted by the police) is the SARS unit, there are deeper reasons driving the anger that fuelled the protests.

Class rule and the centrality of the state in wealth accumulation

Large sections of the Nigerian working class and peasantry – with coal mine workers, railway workers, and women working in markets being central – played a key role in the fight for Nigeria’s independence, which was achieved in 1960. The change that occurred, however, was limited. Colonial bureaucrats were removed, however, the state that had been created by the colonial power – Britain – remained.

Although filled with new faces, class rule was maintained. A local elite joined the ruling class, but the power of British and United States corporations was left unchecked, and capitalism retained. The real winners of the struggle were the nationalist leaders of the largest parties who entered into the state, along with the corporations they were allied to. Indeed, upon independence, one of the only ways that an aspirant local elite in Nigeria could join the ruling class and accumulate wealth privately was through the state – due to colonialism there were few Nigerian capitalists in 1960 (this has changed) and corporations from Britain mainly dominated the local economy. As such, the state became a vehicle for attaining wealth and through the state, often via corruption, the local Nigerian elite built up its capital.

Thus, the history of colonialism and the fact that foreign companies dominated the private economy meant a local elite needed state power to attain private wealth during the first few decades of independence. It is through this that local capitalists were largely built in Nigeria and it is the structural reason why corruption within the Nigerian state – right down to the level of SARS – is a defining feature of the country. It has been estimated that between 1960-2005 a local elite within the state syphoned off US$20 trillion through corruption.

Blatant corruption amongst an elite within or close to the Nigerian state also meant that softer options – such as cooption – to ensure the compliance of the working class and peasantry were harder to deploy, as the failures of the state system were so blatant. In this context, state violence was and has been one of the main options of the ruling class to ensure their rule and protect their own wealth and the interests of multinational corporations (especially oil companies) they are allied with. This is the underlying reason why state violence, including by SARS, is widespread.

Military coups and dictatorships have marked a large part of Nigeria’s history – having state power ensures private wealth can be accumulated, and to hold onto state power, violence has often been deployed. While the state in all countries is an instrument of the ruling class – it protects their wealth and private property – in Nigeria, it is a particularly important path to accumulate wealth. If one group of the elite loses state power, it undermines their ability to accumulate wealth and thus holding onto state power by any means becomes vital – which also means state violence has become endemic.

The protests were not just driven by SARS

Since the 1980s, the ruling elite and their multinational corporate allies have driven through a brutal form of neoliberalism for their own benefit. Before the implementation of neoliberalism, inequality was already rife, but it has now become chronic. In 2019, Nigeria was ranked bottom of a list of 152 countries in terms of measures taken to address inequality, such as protecting labour rights and implementing progressive. The result is three out of every five Nigerians live in poverty and 40% of people live in extreme poverty and survive on less than US$1 dollar a day. The five richest Nigerians have a combined wealth of US$29 billion.

The implementation of neoliberalism has also led to mass unemployment, especially among youth and 27.1% of Nigerians are unemployed. When combined with underemployment – due to a lack of 40 hour a week jobs – that figure jumps to more than 50%. Adding to the powder keg is the reality that the country’s unemployment rate tripled in the last five years. Part of what led to the youth being willing to undertake the anti-SARS protests is the discontent unemployment, poverty and inequality are causing. The anti-SARS protests, therefore, need to be seen in the context of a situation where the working class and peasantry are under extreme pressure and the actions of SARS – and the corruption they represent – was the spark.

Strength of the protests

The fact that the protests have been the largest in Nigeria’s history is promising. While the protests should not be viewed as consciously anti-capitalist, it is only through struggle that people’s consciousness can change and the protests are opening up this possibility, even if it is a small at the moment.

That the protests were also deliberately organised in a horizontal fashion was extremely important. In this, people grappled with a better way of organising and found one that was inclusive. This is vital in the context of Nigeria and the rest of Africa. There is an unfortunate history of national liberation leaders selling struggles out in Africa since the 1960s. The fact that the protests aimed to ensure that there would not be a repeat of a leadership selling out, by making it horizontal, was an important step forward for struggles in the country.

One tactic that has also historically been deployed by the ruling class in Nigeria has been the use of ethnicity to divide and rule. In the 1960s this even led to a brutal civil war. The fact that people of all ethnic backgrounds united in protest, therefore, was vital and opens up a possibility of a unified resistance around other issues such as inequality and poverty.

Weaknesses of the protests and possible way forward

One major weakness was that the protests did not have a unified progressive ideology nor was there an in-depth critique of the role that the state plays, including the police, under capitalism. Thus, if SARS is truly disbanded this would be a victory, but the protests may stop at that point. In the face of state violence, the protests have also tapered off. This may change, but tactics will have to be developed if the protests re-emerge on how to deal with the inevitable state violence that will come. This will be no easy task.

Another weakness is that no structures of direct democracy have emerged out of the protests. Without these, it will be extremely difficult for the protests to revive, or to become a mass movement that can challenge wider issues, such as how capitalism in Nigeria is structured and how this is linked to endemic structural corruption in the state. If the protests are to revive and take on a more radical direction, a clear ideology would have to emerge through debate and reflection amongst a significant section of the protestors. Structures to maintain the movement based on direct democracy would also have to be built.

While this, for now, seems unlikely, being involved in struggle at least opens up the possibility of it in the future. The positive is that the Nigerian working class and peasantry are beginning to question – even if still only at the level of SARS – and are beginning to mobilise. In here, hope lies.