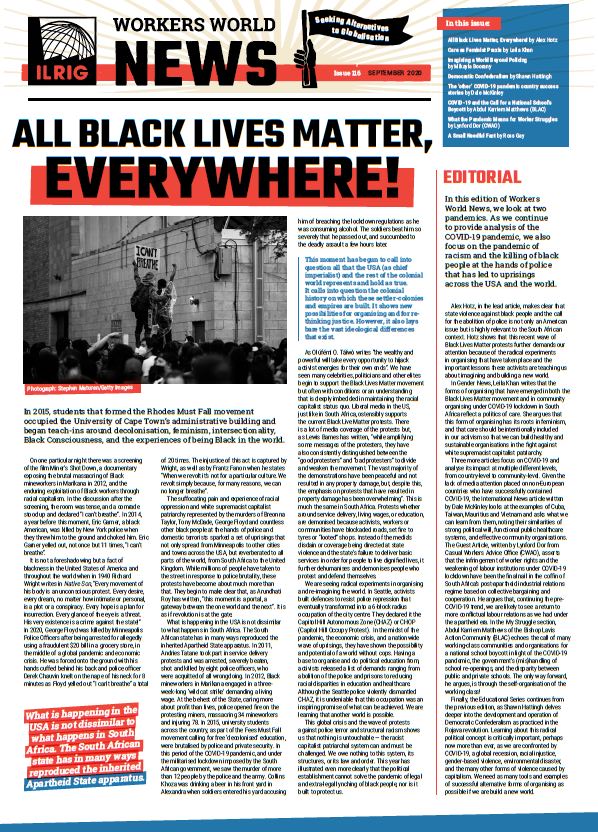 In this edition of Workers World News, we look at two pandemics. As we continue to provide analysis of the COVID-19 pandemic, we also focus on the pandemic of racism and the killing of black people at the hands of police that has led to uprisings across the USA and the world.

Alex Hotz, in the lead article, makes clear that state violence against black people and the call for the abolition of police is not only an American issue but is highly relevant to the South African context. Hotz shows that this recent wave of Black Lives Matter protests further demands our attention because of the radical experiments in organising that have taken place and the important lessons these activists are teaching us about imagining and building a new world.

In Gender News, Leila Khan writes that the forms of organising that have emerged in both the Black Lives Matter movement and in community organising under COVID-19 lockdown in South Africa reflect a politics of care. She argues that this form of organising has its roots in feminism, and that care should be intentionally included in our activism so that we can build healthy and sustainable organisations in the fight against white supremacist capitalist patriarchy.

Three more articles focus on COVID-19 and analyse its impact at multiple different levels, from country-level to community-level. Given the lack of media attention placed on non-European countries who have successfully contained COVID-19, the International News article written by Dale McKinley looks at the examples of Cuba, Taiwan, Mauritius and Vietnam and asks what we can learn from them, noting their similarities of strong political will, functional public healthcare systems, and effective community organisations.

The Guest Article, written by Lynford Dor from Casual Workers Advice Office (CWAO), asserts that the infringement of worker rights and the weakening of labour institutions under COVID-19 lockdown have been the final nail in the coffin of South Africa’s post-apartheid industrial relations regime based on collective bargaining and cooperation. He argues that, continuing the pre-COVID-19 trend, we are likely to see a return to more conflictual labour relations as we had under the apartheid era.

In the My Struggle section, Abdul Karriem Matthews of the Bishop Lavis Action Community (BLAC) echoes the call of many working-class communities and organisations for a national school boycott in light of the COVID-19 pandemic, the government’s (mis)handling of school re-openings, and the disparity between public and private schools. The only way forward, he argues, is through the self-organisation of the working class!

Finally, the Educational Series continues from the previous edition, as Shawn Hattingh delves deeper into the development and operation of Democratic Confederalism as practiced in the Rojava revolution. Learning about this radical political concept is critically important, perhaps now more than ever, as we are confronted by COVID-19, a global recession, racial injustice, gender-based violence, environmental disaster, and the many other forms of violence caused by capitalism. We need as many tools and examples of successful alternative forms of organising as possible if we are build a new world.