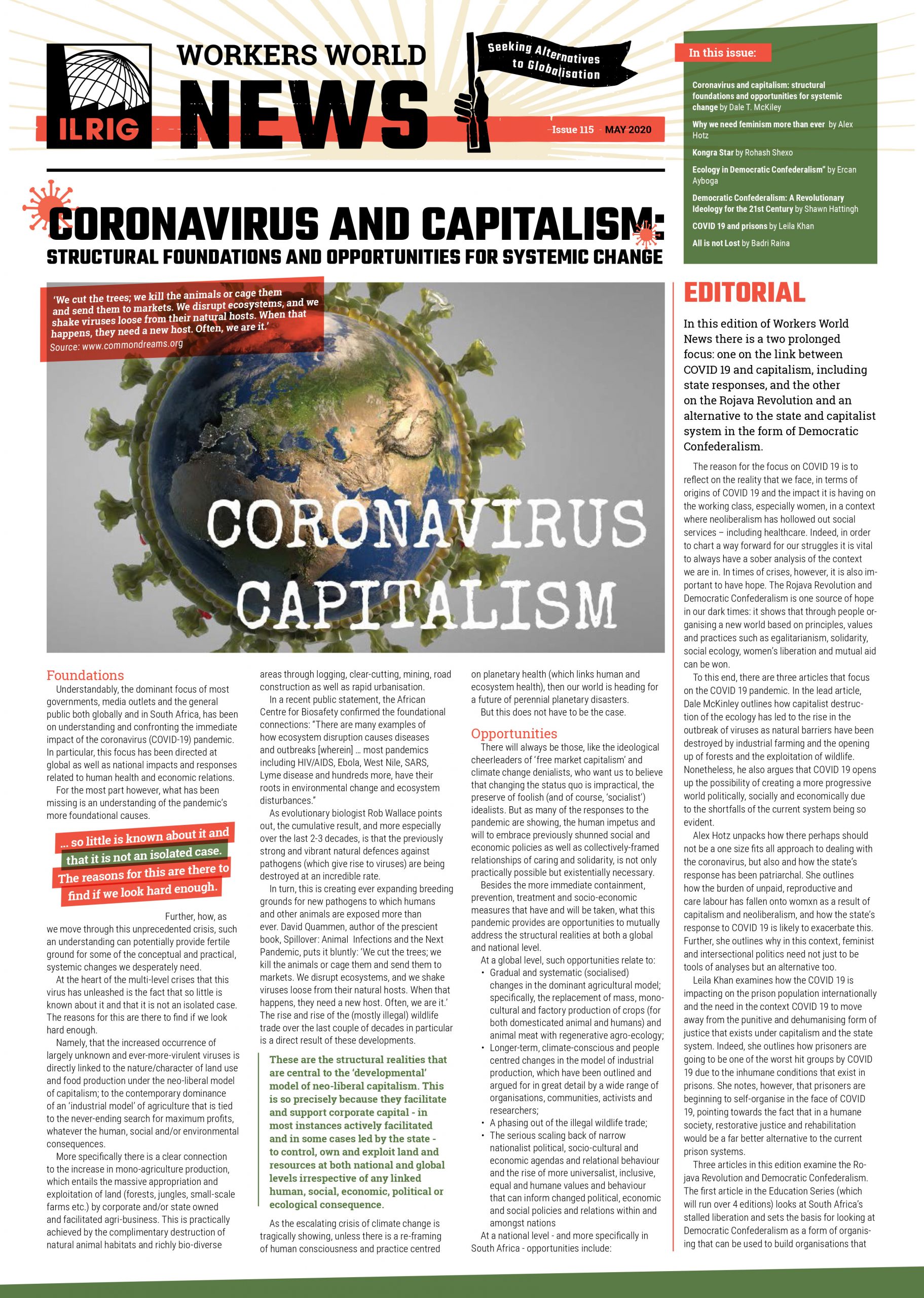 In this edition of Workers World News there is a two-pronged focus: one on the link between COVID-19 and capitalism, including state responses, and the other on the Rojava Revolution and an alternative to the state and capitalist system in the form of Democratic Confederalism.

The reason for the focus on COVID-19 is to reflect on the reality that we face, in terms of origins of COVID-19 and the impact it is having on the working class, especially women, in a context where neoliberalism has hollowed out social services – including healthcare. Indeed, in order to chart a way forward for our struggles it is vital to always have a sober analysis of the context we are in. In times of crises, however, it is also important to have hope. The Rojava Revolution and Democratic Confederalism is one source of hope in our dark times: it shows that through people organising a new world, based on principles, values and practices such as egalitarianism, solidarity, social ecology, women’s liberation and mutual aid, can be won.

To this end, there are three articles that focus on the COVID-19 pandemic. In the lead article, Dale McKinley outlines how capitalist destruction of the ecology has led to the rise in the outbreak of viruses as natural barriers have been destroyed by industrial farming and the opening up of forests and the exploitation of wildlife. Nonetheless, he also argues that COVID-19 opens up the possibility of creating a more progressive world politically, socially and economically due to the shortfalls of the current system being so evident.

Alex Hotz unpacks how there perhaps should not be a one size fits all approach to dealing with the coronavirus, but also and how the state’s response has been patriarchal. She outlines how the burden of unpaid, reproductive and care labour has fallen onto womxn as a result of capitalism and neoliberalism, and how the state’s response to COVID-19 is likely to exacerbate this. Further, she outlines why in this context, feminist and intersectional politics need not just to be tools of analyses but an alternative too.

Leila Khan examines how COVID-19 is impacting on the prison population internationally and the need in the context of the pandemic to move away from the punitive and dehumanising form of justice that exists under capitalism and the state system. Indeed, she outlines how prisoners are going to be one of the worst hit groups by COVID-19 due to the inhumane conditions that exist in prisons. She notes, however, that prisoners are beginning to self-organise in the face of COVID-19, pointing towards the fact that in a humane society, restorative justice and rehabilitation would be a far better alternative to the current prison system.

Three articles in this edition examine the Rojava Revolution and Democratic Confederalism. The first article in the Education Series (which will run over 4 editions) looks at South Africa’s stalled liberation and sets the basis for looking at Democratic Confederalism as a form of organising to build organisations that can become alternatives to capitalist modernity and the nation state system.

Ercan Ayboga looks at the key pillars of Democratic Confederalism including ecology in the Guest Article. He traces how the Kurdish Freedom Movement views the domination of the ecology as being linked to domination of an elite over the majority of people, especially women. From there he traces how ecological activists have been organising within Turkey under Democratic Confederalism.

In the My Organisation article, Rohash Shexo looks at women self-organising under the banner of Kongra Star as part of the Rojava Revolution. She outlines how Kongra Star has been central to bringing about women’s liberation in Rojava in all spheres of life whether politically, socially or economically.