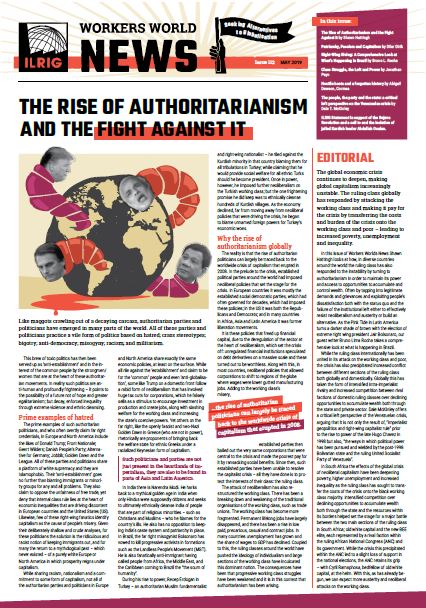 In this issue of Workers Worlds News Shawn Hattingh looks at how, in diverse countries around the world the ruling class has also responded to the instability by turning to authoritarianism in order to maintain its power and access to opportunities to accumulate and control wealth. Often by tapping into legitimate demands and grievances and exploiting people’s dissatisfaction both with the status quo and the failure of the institutional left either to effectively resist neoliberalism and austerity or build an alternative.

As the Pink Tide in Latin America turns a darker shade of brown with the election of extreme right wing president Jair Bolsonaro, our guest writer Bruno Lima Rocha takes a comprehensive look at what is happening in Brazil. While the ruling class internationally has been united in its attack on the working class and poor, the crisis has also precipitated increased conflict between different sections of the ruling class both globally and domestically. Globally this has taken the form of intensified intra-imperialist rivalry and increased competition between rival factions of domestic ruling classes over declining opportunities to accumulate wealth both through the state and private sector.

Dale McKinley offers a critical left perspective of the Venezuelan crisis, arguing that it is not only the result of, “imperialist geopolitics and right-wing capitalist rule” prior to the rise to power of the late Hugo Chavez in 1998 but also, “the ways in which political power has been pursued and wielded by the post-1998 Bolivarian state and the ruling United Socialist Party of Venezuela”.

In South Africa the effects of the global crisis of neoliberal capitalism have been deepening poverty, higher unemployment and increased inequality as the ruling class has sought to transfer the costs of the crisis onto the black working class majority. Intensified competition over declining opportunities to accumulate wealth both through the state and the resources within its borders helped set the stage for a major battle between the two main sections of the ruling class in South Africa; old white capital and the new BEE elite, each represented by a rival faction within the ruling African National Congress (ANC) and its government. While the crisis this precipitated within the ANC led to a slight loss of support in the national elections, the ANC retains its grip – with Cyril Ramaphosa, bedfellow of old white capital, at the helm. With this, as has already begun, we can expect more austerity and neoliberal attacks on the working class.